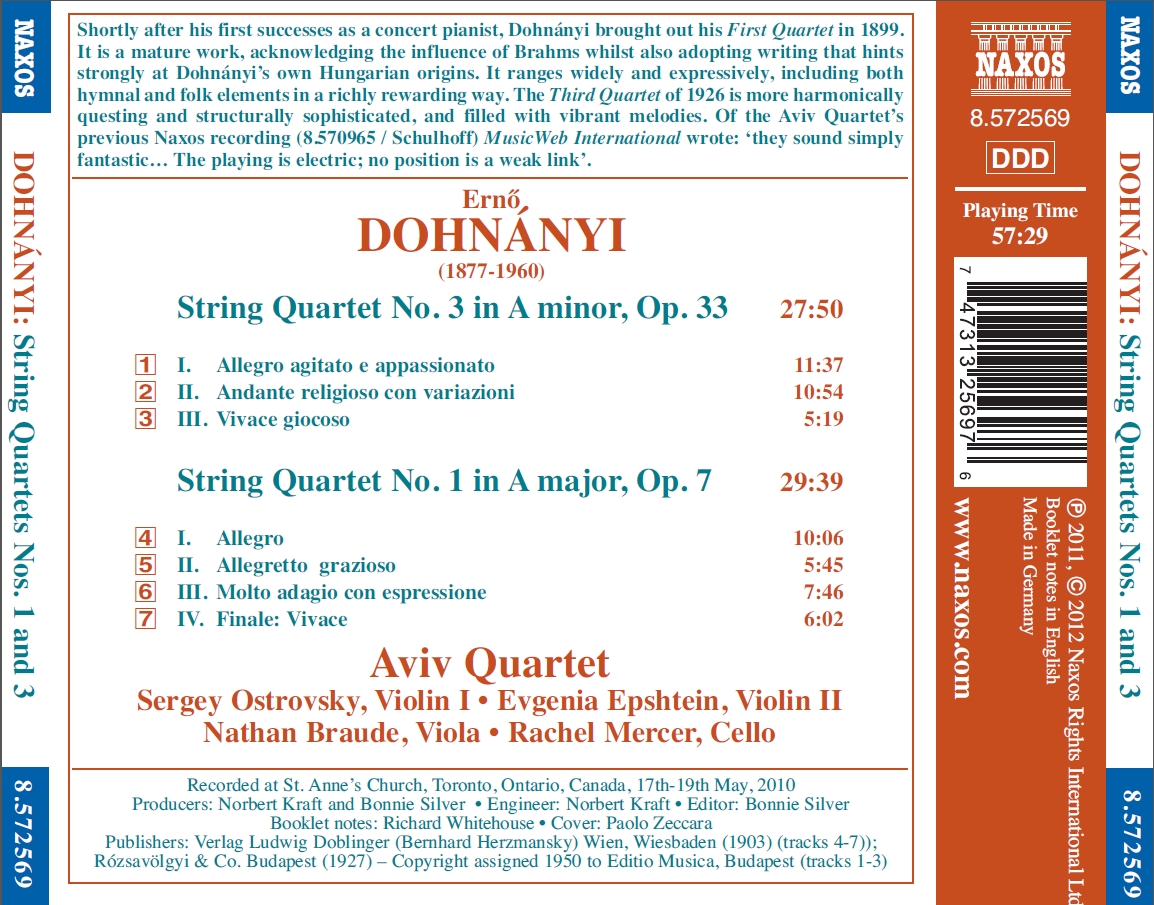 String Quartet No. 3 in A Minor, Op. 33
Shortly after his first successes as a concert pianist, Dohnányi brought out his First Quartet in 1899. It is a mature work, acknowledging the influence of Brahms whilst also adopting writing that hints strongly at Dohnányi's own Hungarian origins. It ranges widely and expressively, including both hymnal and folk elements in a richly rewarding way. The Third Quartet of 1926 is more harmonically questing and structurally sophisticated, and filled with vibrant melodies. Of the Aviv Quartet's previous Naxos recording (8.570965 / Schulhoff) MusicWeb International wrote: 'they sound simply fantastic...The playing is electric; no position is a weak link'.

Ernő Dohnányi was born in Pozsony (now Bratislava) on 27 July 1877. He initially studied music with his father, before entering the Budapest Academy of Music where he studied with Carl Forstner. From 1894 he studied piano with István Thomán and composition with Hans Koessler. His first published composition, the First Piano Quintet, earned the active approval of Johannes Brahms. Following lessons with Eugen dʼAlbert, he made a successful debut in Berlin in 1897, followed by similar successes in Vienna and on tour. He made his London début in 1906 with Beethovenʼs Fourth Piano Concerto, repeated for his American début the following year.

Joseph Joachim had invited Dohnányi to teach at the Hochschule in Berlin, which he did for ten years from 1905. In 1919 he was appointed director of the Budapest Academy but replaced soon afterwards for political reasons. As music director of the Budapest Philharmonic Orchestra, he promoted Bartók, Kodály and other Hungarian composers. During the 1920s, he performed the complete piano works of Beethoven and recorded his own works for the AMPICO reproducing piano. In 1934 he was again appointed director of the Budapest Academy but resigned in 1941 as a protest against anti-Jewish legislation. During the Second World War he stayed in Hungary despite fundamental differences with the fascist regime, but his unease over the post-war Communist government saw him move to the United States, where he taught at Florida State University School of Music. He died, of pneumonia, in New York on 9 February 1960 and was buried in Tallahassee, Florida.

Dohnányiʼs compositional style is rooted in the Austro-German classical tradition. While he made use of elements of Hungarian folk-music, he was not a nationalist composer in the manner of Bartók or Kodály. His compositions include three operas, a ballet and three major choral works. Otherwise large-scale abstract pieces dominate—two symphonies, two concertos each for piano and violin, a Konzertstück for cello and the Variations on a Nursery Rhyme for piano that is his best-known work. Piano music features prominently, while his chamber output includes sonatas for violin and cello, a Piano Quartet, two Piano Quintets and three String Quartets.

Dohnányi First Quartet appeared in 1899 and was published four years later. Although the influence of Brahms is frequently apparent, the formal approach in each movement as well as several unexpected tonal modulations (most likely of Hungarian origin) underline his determination to establish a more personal idiom.

The first movement begins with a warmly expressive theme that soon takes on a more animated demeanour without losing its essential poise. A second theme focuses on the lower strings and is moodier in its profile, though leading to an unruffled codetta. The development takes up the more volatile aspects of the second theme, drawing the music through some wide-ranging tonal modulations in the process. The reprise proves anything but literal, rather continuing the transformation of earlier material before it reaches an easeful codetta as before. This is now extended so that tension can be fully dissipated on the way to a serene close.

The second movement opens with a plaintive, somewhat Mendelssohnian theme for violin over a pizzicato accompaniment, with a ʻtailpieceʼ whose equable manner remains largely unchanged throughout the ensuing variations. The first of these unfolds deftly as a dialogue between the instruments, while the second ventures into harmonically and rhythmically more varied territory. The third takes on a hymn-like manner; then the fourth returns to something like the original version of the theme. The fifth variation is in the nature of a coda whose ʻrunning bassʼ imparts an ominous aura and which resolves only tardily to the main key at the close.

The third movement initially unfolds as a rapt adagio, with its main theme having a discreet though insistent folk-like tinge. The central episode brings with it a greater emotional charge and features some particularly felicitous interplay between the four instruments as well as hinting at the subtly extended tonal language that certain of the composerʼs Austro-German contemporaries (not least Zemlinsky and Schoenberg) were then developing. At length the opening theme returns, but its earlier expansiveness is pointedly not re-established and the movement unwinds to an almost provisional close, as though in anticipation of what is to follow.

The fourth movement resolves any such uncertainty with its energetic, rhythmically well-defined theme that is soon complemented by a more quizzical idea over a ʻrusticʼ drone bass. After the initial theme has returned briefly, a central development draws on elements of both themes for a tensile interplay of motifs in the best traditions of Viennese classicism. The first theme presently reasserts itself and now drives forward to a climax that is rhetorically cut short, only for elements of the second theme (including its drone bass) to underpin the music as it heads into a brief yet decisive coda which caps the movement, and the work, in no uncertain terms.

By the time Dohnányi composed his Third Quartet in 1926, European music had changed radically from that which existed before the First World War. Although he never abandoned tonality (and also steered well clear of serial thinking), the sophisticated handling of form in this piece is paralleled by a new expressive freedom.

The first movement commences with a hesitant theme that soon takes on greater forcefulness as its heads to a purposeful climax. After a leisurely transition, the second theme feels more settled and amiable though it reaches evinces greater emotional intensity as it heads into an uncertain codetta. Starting out as though a repeat of the exposition, the development is wide-ranging in its motivic transformation and expressive scope—building to a powerful culmination, from which a freely varied and cumulative reprise ensues. Here the second theme is extended and once more takes on a greater emotional volatility which spills over into the tempestuous coda.

The second movement centres on a meditative, hymn-like theme which unfolds in noble polyphony between the instruments, with the musicʼs harmonic richness and tonal intricacy increasing as it does so. After a brief pause, a lively scherzo variation interposes itself—drawing on elements of the theme as it reaches a finely wrought climax that can be taken as the emotional apex of the whole work. Winding down, the main theme is resumed in a variation whose ʻwalkingʼ accompaniment builds to a culmination. From here the music heads into an inward coda that touches on the essential pathos of the theme before bringing about a restful close.

The third movement (which one might initially assume to be a scherzo, though the fact that an equivalent of one featured in the previous movement makes this a relatively concise finale and the more effective in context) sets off with an animated theme which gives notice of a robust humour as it proceeds. This seems especially evident in the quizzical central episode, which makes inventive play with offbeat exchanges and rhythmic syncopation—after which the music continues its bracing course. This time a peremptory pause is reached, from which a constantly accelerating coda drives the music on to its dynamic yet good-natured conclusion.